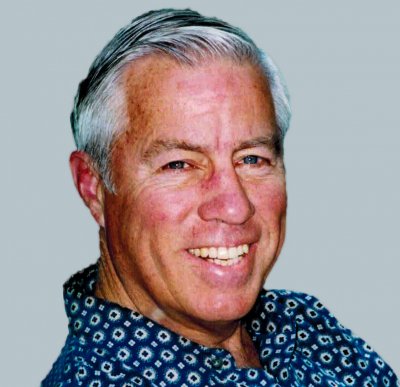 John Hudson passed away suddenly on Friday, June 3rd in Pleasanton, California. John was born in Dallas, Texas, raised in Oklahoma, and spent the last 38 years in the Bay Area where his helping hands will be missed by his family, friends, and neighbors.

John went to Will Rogers High School in Tulsa Oklahoma, earned a Bachelor of Electrical Engineering from Oklahoma State University, and an M.B.A. from St. Mary’s College of California. He spent his early career building infrastructure power systems both in the US and overseas, with projects in Thailand, Peru, Pakistan, and Vietnam. He then became a sales engineer and ran teams for Westinghouse, General Electric, and United Technologies in New York City, Saudi Arabia, and Iran. In 1984, he settled in Northern California as CEO of Luminoptics.

John moved his young family from Connecticut into the old water tower off College Ave in Livermore, CA in 1984, where he happily spent the next 15 years becoming an entrepreneur, starting a local business, and being active in the Rotary Club of Livermore.

In Act 2 of his long and interesting life, John dedicated himself to supporting his wife Nancy as she focused on her career. They settled in Pleasanton 9 years ago. John was always working on a project for himself or his friends; first in line to lend a hand or a tool on a new construction project. John’s adventurous spirit led to a love of travel, and he had visited all 50 states and over 100 countries.

He is survived by his wife of 53 years, Nancy Hudson, his daughter Liz Kerton, his son Joseph Hudson, and their families. John will be remembered for his dedication to family, enthusiasm for adventure, and a smile that could brighten the room. Memento mori, memento vivere.

In lieu of flowers, remembrances can be made to the Alameda County Community Food Bank.