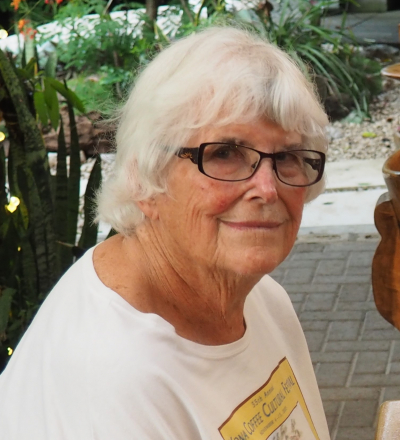 Pat Lane, the face of downtown Pleasanton for years, died May 11, 2022 of congestive heart failure. She was 90.

Pat was the first Executive Director of the Pleasanton Downtown Association and pioneered programs that continue to this day such as the Saturday Farmers' Market and Friday Concerts in the Park. She served as President of the California Downtown Association. After retiring from the Association, you could find Pat staffing the community information table every Saturday she was in town. She was known as much for her volunteer activities as for her professional ones.

She worked as a reporter for the Livermore Independent, Tri-Valley Herald, and the Pleasanton Times. While her two boys were growing up, she supported them on band trips and in their other activities such as Cub Scouts. She was named a life member of the Congress of Parents and Teachers.

Her volunteer and professional work was recognized with the Ed Kinney Community Patriot Award, a Community Development Award from the Pleasanton Chamber of Commerce as well as the Pleasanton Mayor's Award as a Human Service Commissioner and member of the Assisted Living Subcommittee that led the effort to bringing Parkview Assisted Living to Pleasanton. That's a rare tripleheader. She served for 33 years as a board member of the Museum on Main.

Pat received recognition for her service from a wide variety of groups: Lions International, Pleasanton Elementary School Band, Cub Scouts of America, U.S. Air Force recruiting, Pleasanton Convention and Visitors Bureau, 4-H and the Alameda County Fair, California Council for Adult Education and the city of Pleasanton. She partnered with other local residents to collect donations for KQED's auction. She was president of Beta Sigma Phi Pi Omega in 1955-56.

She and her husband Bob Lane were long-time members of the Adult Education Advisory board for the Pleasanton Unified School District. They also co-authored two books, The Amador-Livermore Valley, A Pictorial History in 1988 and Celebrating Family Fun and The County Fair in 2002.

Although she lived in the same home on Amaral Circle near downtown Pleasanton throughout much of her life here, she and Bob loved spending time and traveling with the Pinot Court Group, also known as the Bob Group because so many husbands were named Bob. Pinot Court was where Bob and Mary Ann Butler lived next door to Gil and Juanita Haugen in the Vintage Hills neighborhood.

Heather Haugen Rizzoli recalled how their gatherings were always full of laughs and they had a good time throwing white elephant gift parties using unusual items such as an antique mannikin that Dagmar Fulton was discarding. Fulton was a leader in the museum working with another long-time Pleasanton resident Cynthia Ostle who was the staff person.

"Pat was so proud of this town and adored Pleasanton. She would talk about the town when it was much smaller and the delivery doctor would give away a bird with each new delivery! Can you imagine having a newborn baby that came with a pet bird! She would chuckle when she thought about the bird she would hang in a cage in the kitchen window. Now, that is a small-town doctor," Heather wrote.

She was born in San Mateo to Lewis Bales and Ruth Cybelle Thomas. Growing up, she was a good athlete, following her dad as a strong swimmer and also playing tennis and golf. An only child, she graduated from Piedmont High School and attended the College of the Pacific (now the University of the Pacific in Stockton). While at Pacific, she met and fell in love with World War II veteran Robert J. Lane. Bob proposed to her on a covered bridge so covered bridges became favorite places to visit. They married Sept. 22, 1951 in the college chapel and lived in married student housing until Bob graduated.

She loved traveling to Hawaii, particularly with her children. She and Bob traveled widely in the Western United States and they loved cruises (Alaska, Virgin Islands, Mississippi River, Columbia River). Pat was known for her "legendary" collection of t-shirts and sweatshirts that commemorate life events. She enjoyed card games, dice games and hanging out with friends with a glass of red wine. She and Bob routinely enjoyed a glass at 5 p.m. daily substituting "click" for cheers.

Her granddaughter Annica said, "I have a special place for Gma in my heart as an inspiration for determination, wit, community engagement and strength of family. Thank you for blessing our lives with your love."

Photo Gallery
0 photos Upload a photo
Remembrances
0 entries Submit a remembrance
Memorial service
At her request, no services were held.
Make a donation
The family prefers contributions in her memory to Museum on Main, 603 Main St. Pleasanton, 94566. www.museumonmain.org
About this site     Contact us