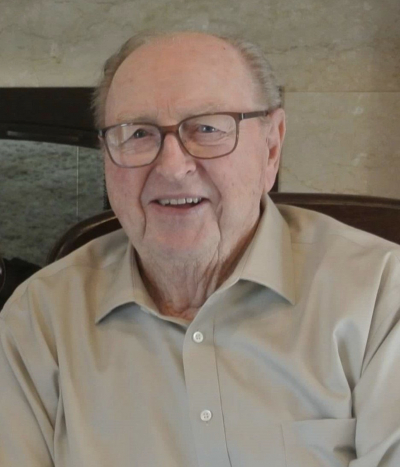 Richard “Dick” Martin passed peacefully September 13, 2022, surrounded by his loving family. Dick was blessed with a large family and always showed his four children the best example of a how to be a loving husband, father, grandfather, and great-grandfather. Dick was preceded in death by his wife of 63 years, Helen Ryan Martin, his parents Julius and Virginia Martin, his sister Kathleen Ray, and his great-grandson, Jack Oliver Turner.

In 1978 Dick Martin was ordained a permanent deacon in the Roman Catholic Church and served the Catholic Community of Pleasanton for almost four decades. Shortly after his ordination, while doing hospital ministry, Dick kept noticing one particularly lonely wing, “filled with people hooked up to machines.” After nurses told him the patients were terminal, he thought to himself “what a terrible way to die, away from your family and home and pets.” So, Dick felt called to organize a hospice program to enable the sick to spend their last days at home. As the founder of Hope Hospice, Dick is remembered for his integrity, sincerity, and genuine love of service.

Dick had a lifelong love of photography and was a longtime supporter of Hope Hospice and their commitment to serving the dying with love and dignity. Dick was always so proud of the Hope Hospice Team who to date has served thousands of families in the Tri Valley Community. In lieu of flowers, the family asks for donations in Dick’s honor to Hope Hospice at 6377 Clark Avenue, Dublin, California 94568.

Photo Gallery
0 photos Upload a photo
Remembrances
0 entries Submit a remembrance
Memorial service
A Vigil will be held Monday, September 19, 2022, at 6:00 PM and Funeral Mass on Tuesday, September 20, 2022, at 10:00 AM; both at St. Augustine’s Catholic Church 3999 Bernal Avenue, Pleasanton, CA 94566.
Make a donation
Donations may be made to Hope Hospice https://hopehospice.com/donate/online-donation-form-2/
About this site     Contact us