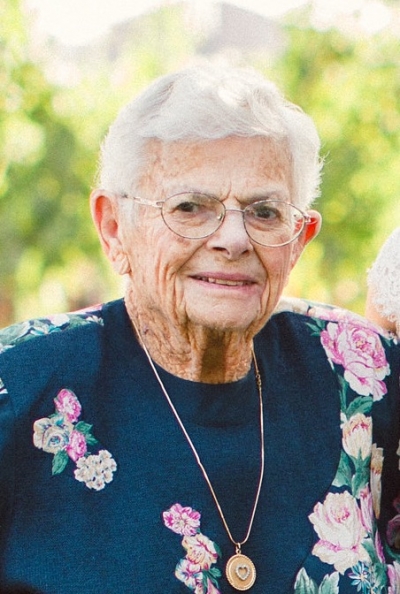 With family at her side, Virginia Caroline Hansen, 94, died April 17, 2017 at her home in Pleasanton. Her husband Howard preceded her in death in 2012. Her son Hans died in 2013, incredibly also on April 17. Virginia will be fondly remembered by her children, Nancy (Peter Mills) of Tracy, and Tuny (Art) Dunkley of Pleasanton. She is survived by eight grandchildren and six great grandchildren.

Virg was born in Bradley City, California and moved to Pleasanton in the 7th grade. She and Howard were high school sweethearts at Amador. She attended UC Berkeley for one year before marrying Howard in 1943. As a new bride she studied to become a nurse at St. Luke's Hospital in San Francisco. But she found it difficult to be apart from Howard so gave up her training and returned to Pleasanton. They lived their entire married life in two houses on Division Street. Virginia was a homemaker and Howard was a dairyman. The Hansens were co-owners of the Hansen & Giger Dairy on Hopyard Road.

Sports were always an important part of Virg's life. As a young girl, she took up tennis and played into her 80s. For many years, she and her daughter Tuny were part of the same tennis group; Virg was the oldest member and Tuny was the youngest. When the group decided it was time to hang up their rackets Virginia argued that they should keep playing. Much to her dismay, she was overruled by her younger playing partners. Virg was also an avid golfer. When she could no longer actively participate in sports, she moved to the card table. She enjoyed Bridge with her friends at Castlewood and spent many evenings playing Pedro with her family. She had many friends and will always be remembered for her terrific sense of humor. Recent visitors can attest that she was funny until the end.

Photo Gallery
0 photos Upload a photo
Remembrances
1 entry Submit a remembrance
From GeorgeMoss
April 23, 2018
As I checked your home page which is the needed to added some of the description in it. But it's time to say appreciation words and our professional research paper writer
Read more
About this site     Contact us